It is a well known fact that East Germany was no footballing superpower. This is somewhat reflected in the absence of football on postal stamps, despite the GDR putting almost anything and anyone on a stamp.


East Germany was a particular country in many respects. This is no attempt to whitewash the country of my birth. Rather, I look at an aspect that has come to my attention in the weeks after the death of my father. What has struck me then was the absence of football on any of the plenty stamps that the GDR had issued during its 40 year existence. Wikipedia is a very useful source to start with as the site indicates the year, the artist who has created the stamp and how many have been issued of any motive.

A quick research will immediately bring highlight one thing: there are only two stamps depicting football. TWO.

One was issued in 1956 to mark the occasion of the Turn- und Sportfest 1956 in Leipzig. There were 5m copies printed of this image. The Turn- und Sportfest was initially only for gymnasts but later incorporated a wider range of sports, including football. The first was held in 1861, the last in 1933. It was held every four years and the host cities changed. Between 1933 and 1945 these sports festivals were politically highly charged by the NSDAP and there was only one festival in 1938 in Breslau. The GDR thus continued a sporting tradition from the Prussian era, something the government and the party always wanted to discontinue. Interestingly, West Germany also organised a Turn- und Sportfest from 1948 onwards; East Germany followed only in 1954. Initially, it was held evrery two years, then three years 1956, 1959 before finally settling for the Olympic period of four years until 1987. Both, East and West held the event in the same year.

The other was issued in 1968 for the Olympic Games in Mexico City. There were 3.5m copies printed of this particular stamp. The other stamps in this series have figures of 4m printed copies for the lower values and 1.6m for the highest value, respectively. This stamp is available for as little as €0.50 either with or without stamp and the whole series of five (ten, if you buy stamped or unstamped) will set you back €5.50. 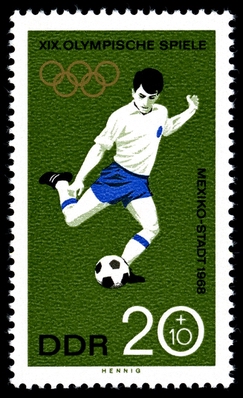 Given the popularity of football this is astonishing and shows the disrespect of the GDR government towards the sport. In return you’ll be able to find plenty of stamps showing scenes from fairy tales, the portraits of important personalities, mostly some unknown communist or other historical figures. Arts, culture and most importantly, anniversaries were very important. However, there were stamps for the Olympics and not just one or two but almost always four or five. Overall, there remains a lack of football on GDR stamps.

This lack of football is of course explicable. East Germany only once qualified for the World Cup: in 1974. Before and after, the national team often failed at the last hurdle or when the DFV finally had a good team together again like in 1990, history dealt them a blow. The feat of qualifying for the 1974 World Cup was only topped once: in 1976 during the Montreal Olympics. East Germany, playing with their best XI, beat Poland in the gold medal match to win their one and only international title at senior level.

The other reason why football was absent was the inefficiency and unpredictability of the sport in terms of medals returned. Football is a team sport and a lot of luck is involved. Therefore, investing time, money and brain power into a squad of 22 men was considered not efficient enough to return a sufficient number of medals, either from the Olympics or the European Championships or the World Cup. Moreover, winning the gold medal as a football team would only have added one medal to the all important medal table which was the only measure that counted for the sports authorities. In contrast, a team of five swimmers could have won a dozen medals, easily.

To be fair however, West Germany did not much to celebrate football on their stamps either. There is not a single one celebrating any of the four World Cups, nor the three European Championships. There are stamps honouring the German Bundesliga champions each year, a tradition that began in 1995.

These images show that sport indeed is a very good source for artistic inspiration, even if only for stamps. The absence of football can therefore only be explained with the dislike of football of those in charge of all matters of stamps.