As Magdeburg prepare for their Cup tie against Dortmund this evening, a short look at what is at stake for both clubs.

The German journalist Hans Joachim Friedrichs once said that superlatives should be rarely used if at all. However, in the case of today’s DFB Cup match between FC Magdeburg and Borussia Dortmund, the tag ‘match of the season’ is appropriate. Not just because it is the biggest crowd ever at the stadium but it may also be an indicator where this season might take either team.

For Magdeburg the situation is clear: they are the underdog. At least on paper. Playing third division, even though they are one of the strongest teams in their division, the tag favourite clearly is around Dortmund’s neck. This has often been to the advantage of the smaller teams, no less Magdeburg themselves who have a history of excelling in the Cup. In what feels a lifetime ago, they managed to beat Cologne, Karlsruhe and Bayern in the Cup in 2000. They came up against Schalke in the quarterfinal and lost 1:0. It was a phenomenal cup run, one that generations keep talking about, especially since the Club has fallen on hard times almost immediately in the wake of this magic time in autumn 2000.

Going back further still, before the fall of the Berlin Wall, Magdeburg were one of the most successful cup teams in East German football, having won seven out of seven finals in which they have played. Their arch rival Dynamo Dresden have the same number of Cups but needed eleven final appearances. Their opponent tonight, Dortmund has managed nine cup finals but only won four of them. Moreover, their performances in the DFB Cup were not always convincing and more often than not they found themselves struggling to beat lower league teams and were eliminated from the competition before the Christmas break. Magdeburg pride themselves of being a typical cup team; they have also won the regional cup of Saxony-Anhalt a whopping eleven times since its inception in 1991. 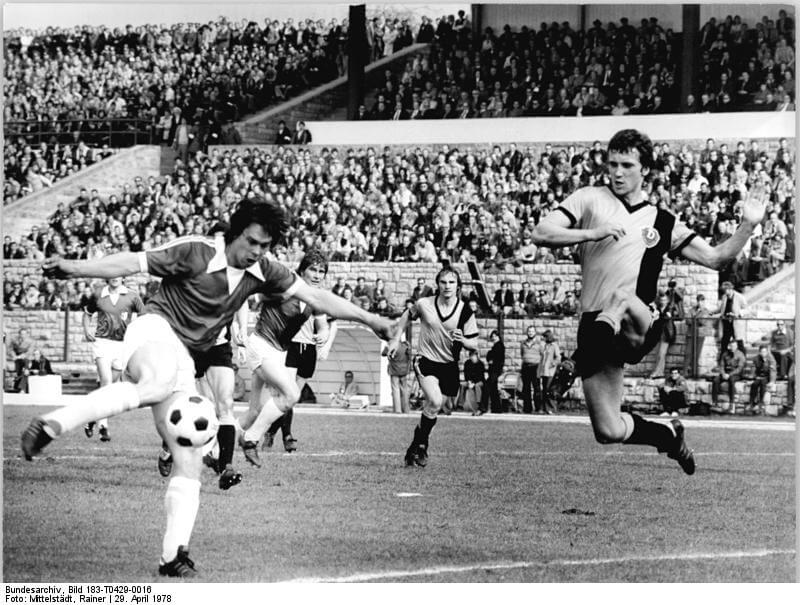 This season Magdeburg are doing very well indeed and their performances so far indicate that they are a serious candidate for promotion to Bundesliga 2 come May 2018. Out of a total of thirteen games so far, only three were lost yet no one broke into a cold sweat as the team of Jens Härtel bounced back and won the following games. If anything, this indicates that in this division on their day everyone can be beaten. Additionally, the team is settled and a there is a strong bond between them as the likes of Sowislo, Beck, Butzen, Handke were part of the team that won promotion in 2015 and are still playing together. This season they are more balanced and not only focused on Christian Beck up front. With Türpitz there is a player who never gives up who runs for ninety minutes and more if necessary. His record so far underlines that quite impressively: six goals and five assists make him the top scorer and a player to watch tonight. Another one is Dennis Erdmann who has been compared to Roy Keane. He is the anchor in midfield hovering in front of the back three when defending and immediately switching to go forward at pace.

This game could be decisive in that it forecasts the direction of the remainder of the season. This is true for the visitors tonight as well as the hosts. Dortmund, though top of the Bundesliga table, have so far not convinced in the Champions League where they were held to a 1-1 draw at Nikosia. Their last league game ended in a 2-2 draw against Frankfurt. Bayern and Leipzig are already approaching fast in second and third place respectively. The league is unlikely theirs this season as is any success on the European stage, that is to say the Champions League. The Europa League is possible, yet again past performances are to be taken into account and speak against them: two out of four finals won is OK, but if you consider yourself to be a European top club, this is ratio is underwhelming. The DFB Cup therefore is the competition that realistically offers their only chance to win silverware this season. It is make or break this evening at the Heinz-Krügel-Stadion for Dortmund.

As was already mentioned above, Magdeburg can define their season by winning tonight. It will eventually mean that promotion will be difficult to achieve as their focus might be too much on the cup and not the league. The most important thing will be to give Dortmund a fight the visitors will remember for the rest of the season and take as much positives from this as possible. Surely, coach Jens Härtel prepare the team for task ahead. Magdeburg will hardly surrender tonight without a fight. It is the question how they will rise to the challenge of facing Dortmund. The same has to be said for the BVB. They have to accept the challenge; the match is theirs to lose. The stadium will be noisy for ninety minutes, which should not be a problem as the yellow wall of Dortmund is the size of Magdeburg’s entire stadium. Yet, there will be 21000 people standing throughout the match and screaming their heads off and the team in blue and white will respond to this as they have often done. 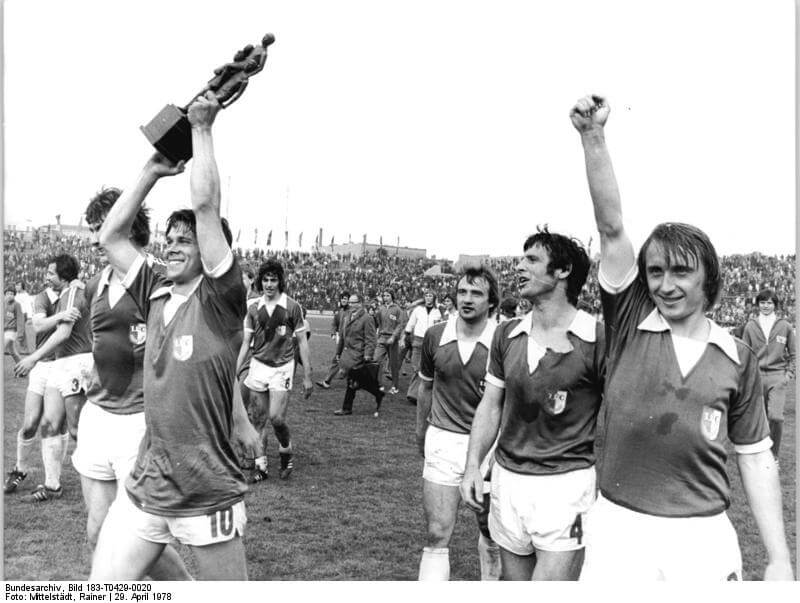 Parading the trophy after the final whistle, 1978.

The scene is set for a thrilling match that hopefully will be in the best of cup traditions where the supposed smaller team come up against a team with super stars such as Mario Götze and Marco Reus and gives them a good run for their money. The city of Magdeburg is buzzing with excitement these days even though the mood was moderate after the draw in August. It was the team’s performances in the two months since that have instilled the believe that everything is possible. In August Magdeburg eliminated Augsburg in the first round and everyone said that the sensation has not happened. After last week’s draw in Nikosia one commentator argued that it will be a sensation if Magdeburg fail to beat Dortmund tonight.

P.S.: If you like what you have read, why not think about supporting this blog?
Become a Patron!