The Seventies in German football history are dominated by discussion of the team that have won the 1972 European Championship and the 1974 World Cup. On course for their triumph against Holland, West Germany had to face East Germany for the one and only time. It was we against us. However, there was more to this decade than just that famous win in Hamburg on 22 June 1974.

While the 1970s were and still are portrayed as the decade of total football played by the Dutch and West Germany winning the European Championship in 1972 and the World Cup two years later, East Germany experienced a decade that saw a European Cup triumph in 1974 as well as Olympic Gold two years after that. During this decade, the GDR produced arguably the best football in its 40 years of existence.

The successful spell began at the Munich Olympic Games in 1972, which were overshadowed by an attack of members of the Palestine group Black September, during which 11 Israeli athletes, a German police officer and 5 attackers have been killed. It left the Games with a sour aftertaste and planted a feeling of insecurity among the Germans, who saw themselves confronted with the bloodiest decade in their post-war history.

The football tournament in 1972 was a playground for Eastern European countries to shine as the medals went to Poland, Hungary and a shared bronze medal to the Soviet Union and East Germany. During the tournament the GDR beat their western compatriots in a team that featured Uli Hoeneß and Ottmar Hitzfeld as goal scorers for West Germany. The game finished 3-2 for East Germany in front of an 80000 crowd in a packed Olympic Stadium.

While Hoeneß and Hitzfeld were the top stars in the West German team, the East Germans fielded a full strength side, underlining the importance of sport as an important tool to show case the socialist way of life a the superior one. Croy, Zapf, Pommerenke, Sparwasser, Streich, Kreische and ‘Black Peter’ Ducke are names that let the hearts of East German football afficionados beat faster.

The year 1974 was arguably the biggest year for East German football. It all began with FC Magdeburg winning the East German Cup in 1973 against FC Lokomotive Leipzig. Their European Cup campaign kicked off with a 2-0 win on aggregate against the Dutch representatives NAC Breda, followed by a 3-2 win after extra time against Banik Ostrava. The quarterfinal saw the team of Heinz Krügel take on Bulgarian minnows Beroe Stara Sagora which they beat convincingly 3-1. Admittedly, these teams were not the créme de la créme of European football.

The first real test came in the semi-final where Sporting Lisbon who had an equally simple task to get through the previous rounds by beating Cardiff City, Sunderland and FC Zurich. The other semi-final was played out between AC Milan and Borussia Mönchengladbach who have eliminated Dynamo Zagreb, Rapid Wien, PAOK Thessaloniki as well as Vestmannaeyja, Glasgow Rangers and Glentoran FC respectively. 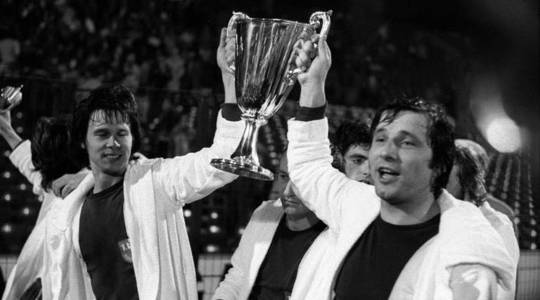 The final in Rotterdam was the biggest success East German football has to show off. The tiny crowd of 4600 is to date the lowest attendance for a European Cup Final. Many expected a final between Mönchengladbach and Milan and therefore the semi-final was considered the ‘real’ final. This however did not stop Magdeburg to play their natural game in an attack-minded 4-3-3 with Jürgen Sparwasser in the centre, Martin Hoffmann to his left and Detlef Raugust on the right. The final score was 2-0 and caused a collective outbreak of joy in East Germany.