This year’s Women’s World Cup was hoped to be the best ever. This is possibly what has been said and will be said about past and future tournaments. More accurately, a World Cup can give a glimpse into the state of the game. And there is still some work to do. This review will look into several aspects of the World Cup, covering a brief media analysis and several points that are necessary to mention.

One point strikes immediately: it is the size if the grounds. The stadia for a start are smaller than those used for Euro 2016. The biggest is the Groupama Stadium in Lyon which will host both semi-finals and the final. Surely, these matches will be sold out due to their nature yet questions remain as to whether FIFA has done their best to get as many bums on seats for this tournament. This starts with the simultaneousness of three major tournaments in June and July: the World Cup, the African Cup of Nations as well as the Copa America. Moreover, some games kick-off at the same time and surely a game featuring Messi or Neymar does pull bigger crowds at 9pm than a women’s game. Was it really necessary to let these matches collide? If FIFA want to do something about the niche image of women’s football than it is necessary to treat it just as the men’s game is being treated.

The France mens team has pushed their female counterparts from their base camp in order to prepare for a qualifying match, while the women play in the World Cup. What is more important? A World Cup or a qualifying match? When the TV viewing figures for the women were double that of the men’s it seemed everyone was surprised. Le Parisien offers some stats that show that the women pull about 10m TV viewers, the men for their European qualifier v. Andorra just 5m viewers. This of course is a no brainer as a competition attracts more interest than a qualifying game and it beggars belief that this needs to be highlighted.

The final point is of course the money. While men took home more than €300000 after their succes in Russia last year, the women would have earned a €40000 bonus had they woin the tournament. A difference of some proportions.

Media Coverage
It seems that at for least the duration of the World Cup the #metoo debate that has engulfed the French media seems to have brought some rewards as the tournament begins with some of the daily papers dedicating their front pages and a significant number of pages to the french team and those teams also competing. The pages are filled with interviews as well as facts. The tone of the coverage is adapted and you think the whole media business has taken the last couple of years into account.

The left leaning ‘Libération’ has dedicated five pages in total to the opening of the World Cup. The sport is ready to take the next step, authors Adrien Franque and Anaïs Morgan argue. Both cite numerous points that justify their opinion. The development of sports, particularly womens sports over the last few years, especially football where the set-up of the clubs has become more and more professional. The national team is performing well. Last but not least, the television rights have been sold for €10m this year, demonstrating a tenfold increase from 2015. The league has seen an even bigger increase in revenue from TV: in 2011 the rights to show womens matches were €110000 for the league, now they are worth €6m. Even the male stronghold of sports media L’équipe have acknowledged the increased public interest and have 17 journalists working on the competition. The same paper also offers a brief overview of terminology for the womens sport as can be seen in the picture below. 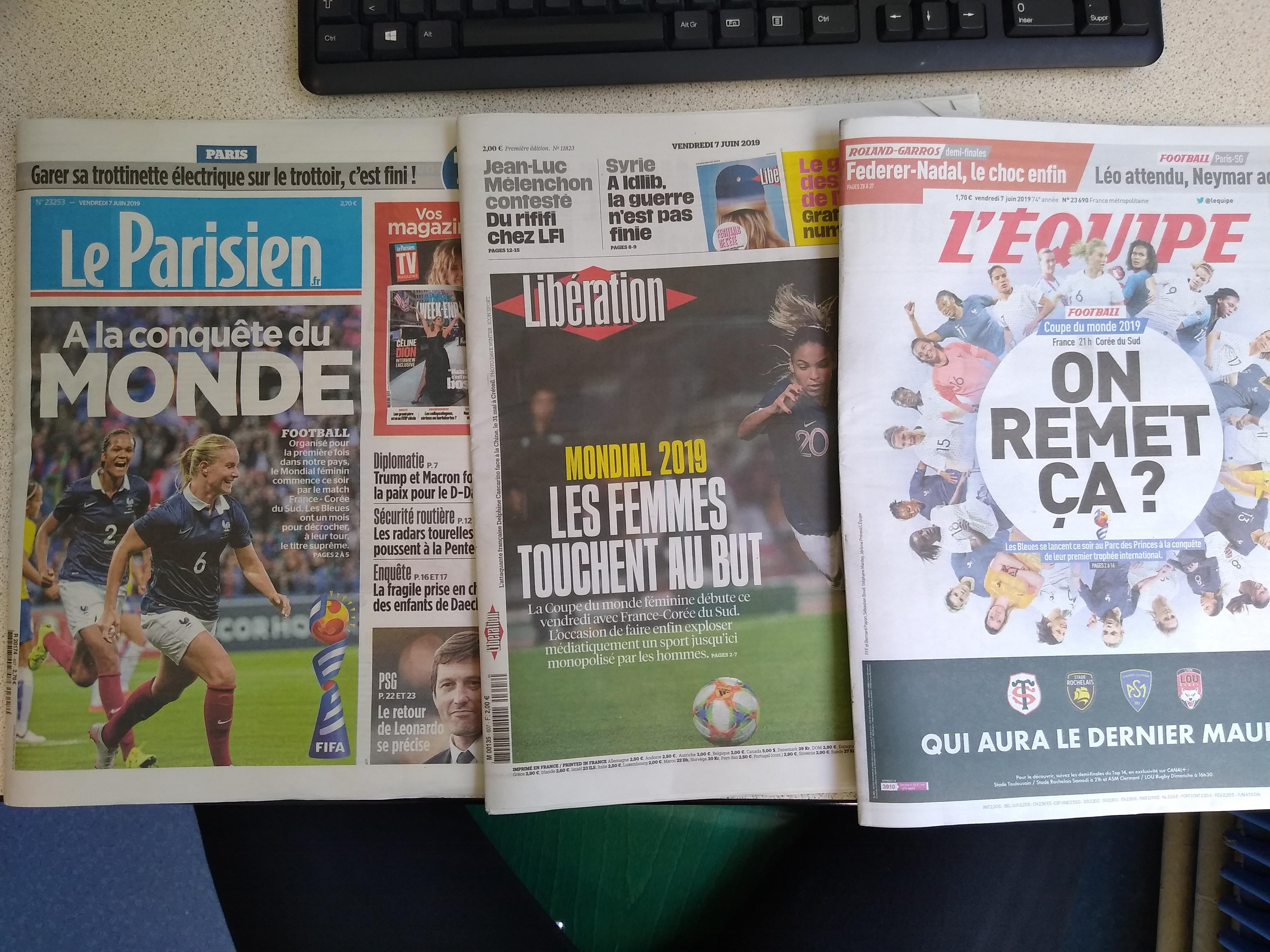 A week is a long time
What a week also proves is that the attention span of the public is short. During the week from the tournament’s start on June 7 until 14 no paper had any front page dedicated to the women’s world cup with the exception of L’Equipe, the daily sports paper. The paper which is based near Parc des Princes has recently held a meeting with their readers. It was made clear that the sports interested public wish for an equality in male and female sports. Just to demonstrate that the editors have not understood a thing, the same day’s main story was the return of Leonardo as sports director at PSG, a post he has previously held between 2011 and 2013. There were five pages given to this story which normally is nothing more than a note. The world cup was not deemed to fill the pages and was placed after this main story.

The decision to buy the television rights was one of the best ideas ten years ago, argued the head of sports at TV1, one of France’s terrestrial channels. The figures went up from a few 100000s to now 10m viewers for the french womens national team. That of course is a huge increase yet it remains to be seen whether these figures can be sustained in the matches in the future after France went out in the quarter-finals.

With the place womens football said to take a step towards the next level in terms of coverage and public attention, the coverage suggests that it is still a long way to go before parity will be reached.

Just to illustrate the point, this tweet says it all about FIFA’s attitude towards women.

Great new book on the history of Womens Football. But how come the authors are not mentioned with one single word, dear @FIFAMuseum? @JeanMWilliams #WomeninFootball pic.twitter.com/DFh3uWbHOX

This tweet again highlights the invisibility of the women’s game as there were no screenings in Liverpool but it was possible to bet on the success of the lionesses.

Plenty of female @FIFAWWC fans in our high streets – in betting shop windows. I haven’t heard of any WWC screenings in Liverpool but I can easily bet on the games. Gambling has such a tight grip on football & fans. #whenthefunstopsstop #asif #WWC2019 #WWC pic.twitter.com/kc0PRAhDbK

The VAR Farce
One of the major talking points in social networks and in the stands was and is the Video Assistant Referee, VAR, which has been used for the first time in a major tournament this year. There was no dry run in any tournament before, although there were the Algarve Cup as well as the She Believes Cup; both would have been an ideal platform to test the system and see whether it would be applicable in a tournament of this magnitude. The effort made for an apparent infringement is not justifiable as the time elapsed between the action and the decision for or against, was way too long. England’s second goal against the United States came off one of the best moves of the match but was ruled out because the player was marginally offside. The long wait between the outburst of joy and the cancellation of the goal was agonizing. In the match between Argentina and Scotland there was a similar scene just before the penalty and the re-take as the keeper moved off the line. FIFA would never have dared to try this system in a man’s world cup, yet the women seem to be the perfect guinea pigs.

Final Remarks
The general view is that women play football just as good as their male counterparts; it was refreshing to see technical ability in abundance, goalkeeping excellence and refreshingly open play. No cynical fouls, no rolling around screaming as if being hit by a train albeit there was only the slightest of touches: all this was absent. The referees were not surrounded by players but respected despite their authority being undermined by VAR.

For the men’s version a ‘man of the match’ award is given, yet for the women it is only the ‘player of the match’. Seriously FIFA cannot get their heads round the idea that there is two equal sexes, only the first and the second sex.

However, there is still much ground to be covered: marketing the event in Paris before and during the tournament was absent, thus missing a chance to fill the grounds even more. On the other side, the absence of overmarketing and overselling like it happened with last year’s tournament in Russia offered the idea that football, despite its popularity is not everything in life. Still, to get full recognition, there is much work to be done for those governing the game. Their motivation will be questioned, however.

Disclaimer
The papers chosen for this brief research were L’Equipe, Liberation and Le Parisien from the opening day of the 2019 women’s World Cup and various days during the tournament. Attention was given to the quantity of the coverage as well as the quality, i.e. the tone of the reports researched. The aim was to find out whether the world cup would change anything in terms of coverage and if the #metoo debate after the #lol affair that has engulfed the French media in spring this year has had any impact on the reception of this event.