This is the game every one has been waiting for in Magdeburg: The Greatest of the World host their long standing rivals from Saxony’s capital Dynamo Dresden. In terms of marketing value, this game is surely among the top ten in Germany and pretty high up in the rankings in Europe, too. It is not only that the history of this fixture is putting weight on the match; current developments add to the importance and the outreach of this match.

The heyday of this rivalry came in the 1970s when Dresden and Magdeburg were the teams to beat in order to decide the Oberliga, the East German top division. From 1971 until 1978 it was Dresden 5 times and Magdeburg 3 times who were top at the end of the season. After that, the league descended into farce as BFC Dynamo had to be crowned champions every year following the wish of Erich Mielke. The season 1977/78 was a special one: it marked the third consecutive league title for Dresden and was also the tightest as the decision came only on the penultimate day of the season. Magdeburg traveled to Halle, their fiercest rival and lost the game and thus the championship. This was the closest they finished near the top for a decade; only in 1989/90 would they be 3rd again, two points behind Dresden. Again, the title was played out on the final day of the season. Dresden thumped Saxon rivals Lok Leipzig 3-1 and Magdeburg were defeated by Karl-Marx-Stadt (now Chemnitz) and finished 3rd. It proved to be a false dawn and was the beginning of 25 years of hardship and struggles for Magdeburg. Dresden on the other side enjoyed life in the Bundesliga but also suffered financial difficulties which effectively meant that they were relegated in 1995. It is questionable, whether having no headlines at all is worse or being subject of debate about financial mismanagement, fan conduct etc. Whereas Magdeburg appeared to be a lost cause for most of the 1990s and seemed to go nowhere but stay put in amateur football.

With the promotion to the 3. Liga in 2015 Magdeburg have achieved the greatest feat in the club’s recent history. Moreover, they enlightened the division by winning their first 3 home games, thus prolonging the wave of euphoria that was running through the city already since the early days of June 2015. The crowd were magnificent for most part of the season, making football purists looking enviously to Magdeburg as regularly more than 18000 attended and turned the stadium into a noisy cauldron. What began in the Ultra section infected other sections of the ground and has now become an exchanging chorus between the different stands during many home games which perplexes the opposition. Magdeburg have become the team with the second highest attendance in this league, behind, yes, Dynamo Dresden.

Before kick-off in Dresden in autumn, Dynamo supporters unfurled a banner that covered the whole ground! This was a world record. It also initiated a debate what is a choreography and what is only a banner. Surely, the latter applies for Dresden; it is nonetheless a huge effort and deserves respect. Therefore, something special is to be expected for this match by the Magdeburg crowd in order to pull off something similar.

Despite Dynamo’s 3-2 win in autumn 2015, it was not a convincing one even though Magdeburg once trailed 3 goals but scored late in the match to rescue some honour and give the Dynamo defense something to think about. The main difference between the two clubs is the style of play. Dresden have a much more accomplished style relying on their technique. Magdeburg, in tradition with the city’s engineering heritage are fighters and grafters. It is a physical manner that they engage in that is often not looking beautiful but ultimately reaping its rewards; and in football that’s all that matters and their position in the table underlines that further. 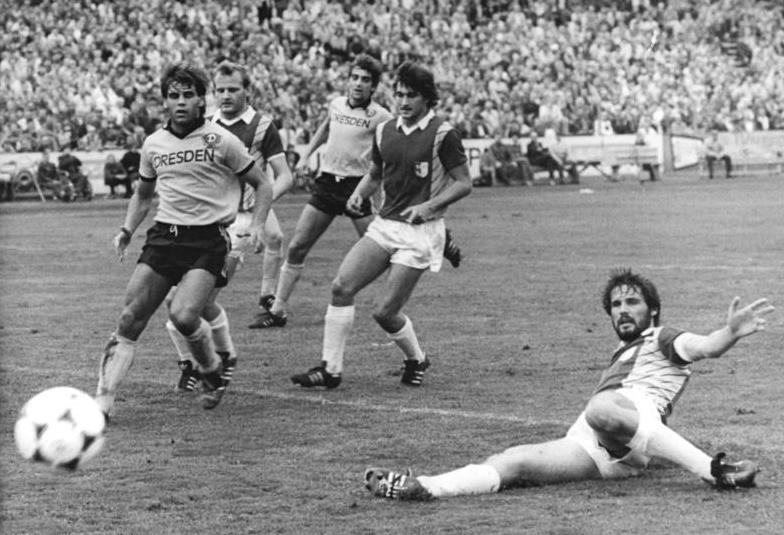 Whatever happens before the match in the stands and on the pitch during the 90 minutes, the atmosphere will be something to cherish and preserve as Dresden are destined to go one division up come May. A win at Magdeburg could pretty much seal their promotion. It is deserved as they are the best team in this division by a country mile and were far too big. Magdeburg will finish this season in the top half of the table and can build on this remarkable success in their first official season in professional football.