The Ch’tis are coming to Paris and they were in celebration mood: the atmosphere around and in the Stade de France was almost festive ahead of the match. Lens had swapped their ground for the biggest game in every other club’s season against Paris Saint Germain. The Parisians meanwhile seemed to be in their home neighbourhood in the banlieue of Saint Denis.

The people of Lens are a funny bunch.

they cried outside and inside the stadium and created a buzz rarely seen at Stade de France. Their home match vs. PSG was re-routed here as their ground, Le Stade Félix Bollaert is currently under re-construction and thus RC Lens find themselves on the road for their home games. Last night however, their home game felt like an away game. Nonetheless, the team and fans gave a strong show.

The match was also a home coming of sorts for Antoine Kombouaré, who as a PSG player won the league and the Cup in the early 1990s. Roughly 15 years later he repeated the feat of winning the French Cup in 2010 and oversaw the transition of mediocre PSG into one of the super rich clubs in Europe during the summer of 2011. His modest character was considered not glamorous enough for the new owners and he was sacked in December 2011 and replaced by Carlo Ancelotti. Irony: PSG were top of the table when Kombouaré left, Ancelotti managed to steer the club to a second place finish in the remainder of the season.

The past is a foreign country L.P. Hartley wrote roughly 60 years ago; the present did not look to rosy for Lens: after 9 games, only 8 points have been won, 6 defeats speak a clear language that the team that won promotion have difficulties to adapt.

Yet, this did not show in the first contests of the match. Paris, naturally held more possession but Lens more often than not interrupted their stride and moved forward. Their movement however, was less precise so that Paris were not threatened. It so happened that Paris committed men forward that Lens found their way through to the other side with quick counter attack. Adamo Coulibaly entered the box on the right and looked as though his legs would give under the burden of the occasion. He disapproved the onlooker’s doubts and finished low into the far corner. Sirigu had kept his angles tight but the shot was fierce and well placed.

Paris seemed rattled and Lens wanted to exploit that. Had they scored from one of their half chances, Paris would have crumbled. That this did not occur was largely due to Marco Verratti and Javier Pastore who kept the game in Parisian hands. It was after a long ball over the top after roughly 20 minutes which put Cavani through on goal with only Riou to beat. The attempted lob was too low and the keeper easily saved. Only minutes later Cavani repeated the feat. This time he occupied defence and keeper longer as he kept the ball in the air turned 180 degrees and tried to shoot, only to see his shot once more blocked. 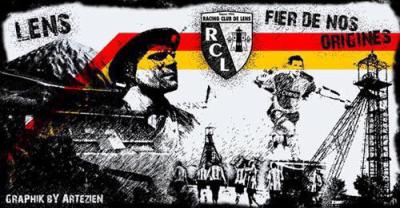 The pressure on the Lens goal was mounting and just before half time Javier Pastore rescued a ball that bound to go out by sliding and and apssing to Maxwell who had a great game. The former Barca player turned inside and nicely layed the ball off for the onrushing Cabaye whose shot from the tip of the D brought the equalizer. The Stade de France errupted. Now Lens were rattled.

Surprisingly fast another goal came. This was entirely the keeper’s fault who rushed out of his goal to the edge of the box to beat a ball away. This action was short sighted just as the trajectory of the ball was too low to fly away wide. It bounced to Maxwell who advanced a few meters and gently lobbed the ball into the empty net. Within 5 minutes Stade de France errupted with joy. The first goal was a very good team effort, the second spoke of Paris’ individual class.

True to their battle cry Sang et Or, blood and gold, Lens fought and almost equalized, only to be denied by a quick reaction from Sirigu in the PSG goal. With the sore at 1-2 the teams went in for half time refreshments and further instructions. These were not productive it seems. The match descended into chaos after 52 minutes for 8 minutes.

Cavani’s hunting gesture back fired as he was sent off for celebrating.

A cross from the left by Maxwell nearly found Cavani. The Uruguayan was pushed, though it appeared that he made the most of it. Clearly he was in a forward movement and not moving slowly. Therefore the impact of a push is felt more severely than under normal circumstances. The referee bought it and awarded a penalty. The culprit, Gbamin received his second yellow of the night and had the shower all to himself. At least for 5 minutes as his team captain, LeMoigne followed after a foul against Cabaye.

The biggest fool of the evening however was Edinson Cavani. He won the penalty and decided to take the chance to score. No problem with that and he duly converted, sending the keeper the wrong way. After the celebrations were over Cavani turned towards the Lens end, kneeled down and aimed an imaginary gun – Cavani is a keen hunter one has to add – towards the Lens supporters. That got him a yellow card, deservedly. This decision he contested. In the process he grapped the referee’s arm who considered this an offence and awarded a second yellow to Cavani. Luckily, he was the only PSG player being sent off and thus had the shower all to himself to re-consider his idiocy.

That however, was the end of the game as Lens hung on not to concede more and PSG routinely administered the result. The game on the pitch was maybe over, the contest on the terraces certainly not. Against 60000 local supporters, Les Lensois bravely sung and made themselves heard. It had the flair of an early 2000s ultrà scenery in Germany: There people who constantly sung and encouraged others to join in. They stood on the perimeter fence, top off and sang. The repercussions of the disbanding of the PSG ultràs 4 yours ago were still audible, or rather not as their hard core was significantly smaller than that of the Sang et Or.

Lens enjoyed their trip away for this home game, yet an audience almost double the size of the town’s inhabitants possibly gave them stage fright. Gaining promotion to the top flight is one thing, staying there quite another. The team played with blood and gold but too much throughout the match was ordinary football. For the team and their manager the task will be to find the resolve to stay up. If only for another ‘derby’ away at Stade de France. Paris will be lucky to get the 3 point and narrow the gap to Marseille. Theirs was a depleted squad with absences of the biggest names, yet after initial jitters, they got their way back into the game and managed to control it.